This macro is never executed by itself, but only by being called during the execution of other macros. Especially macros performing background operations on open files (such as running “LJ.exe,” “Beam.exe,” or EditScor operations) rely on this macro in order to identify the revised file that results from the background operation. Whereas “GLOBAL Find most recent file – ONE” in essence performs an “SM” command within Score in order to create a new time stamp on the open file (thereby allowing it to be identified by the process), some background operations can take long enough so that the revised output file being written to disk is not yet available when the “plugin” attempts to read the revised file back into Score. In simpler terms, the logic is this:

Within Macro Express, position this macro into GLOBAL settings: 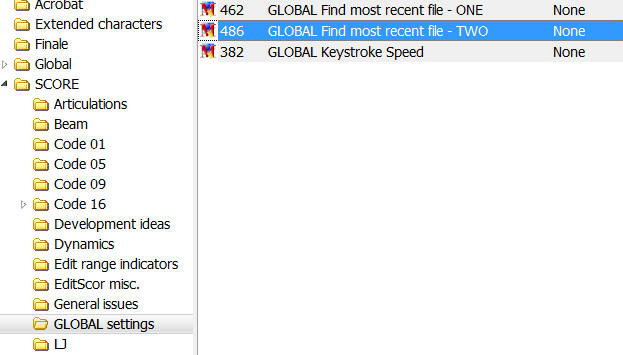 To avoid double-postings of macros on this site, this macro and the support file are included on the REQUIRED MACROS page.